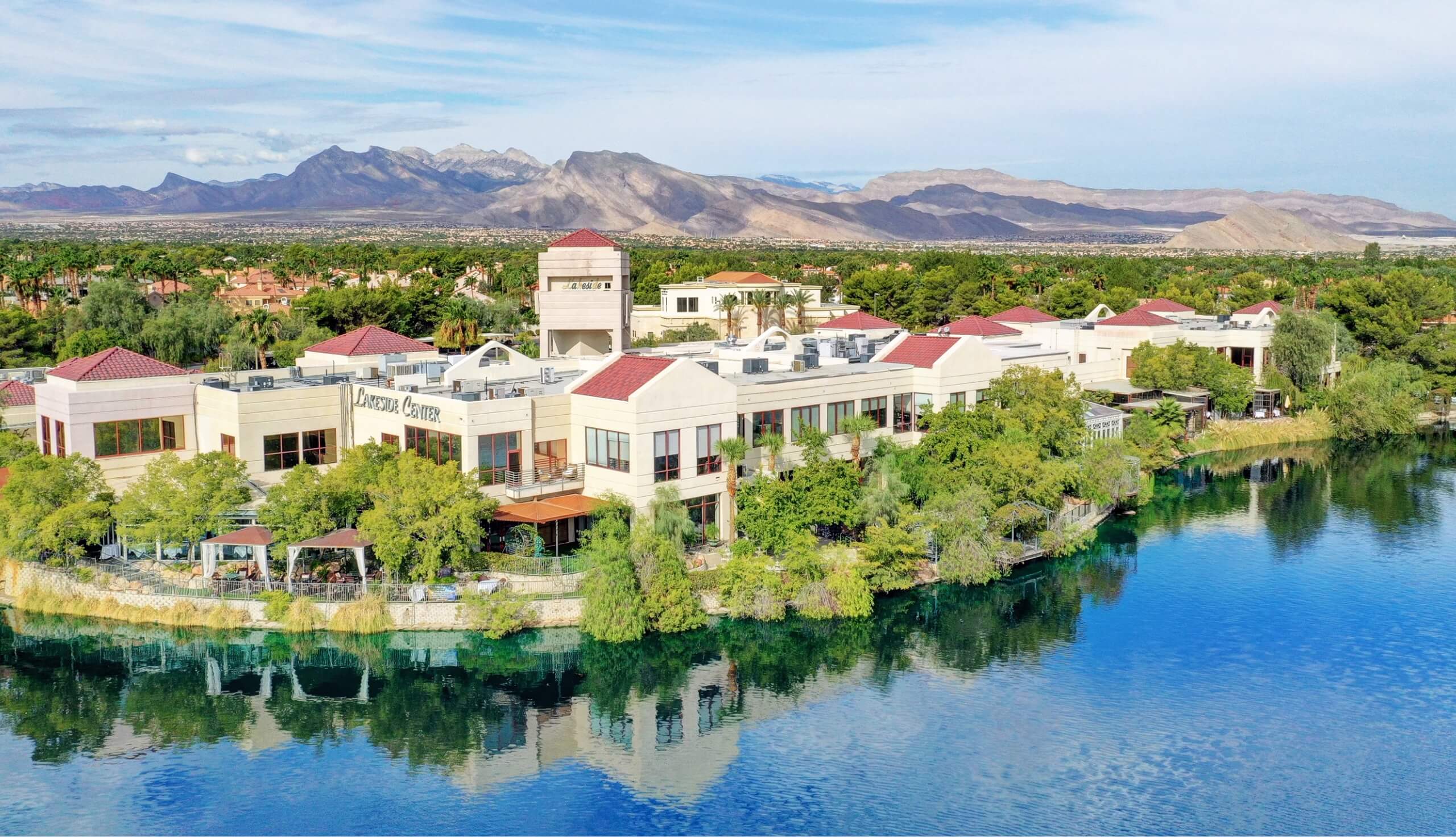 If you are considering a move to the Las Vegas area, you have made the right choice! Nevada ranks as the number ONE "Most Livable City" due to its pro-business attitude, low tax burden and employment/product growth.

What kind of information you looking for? 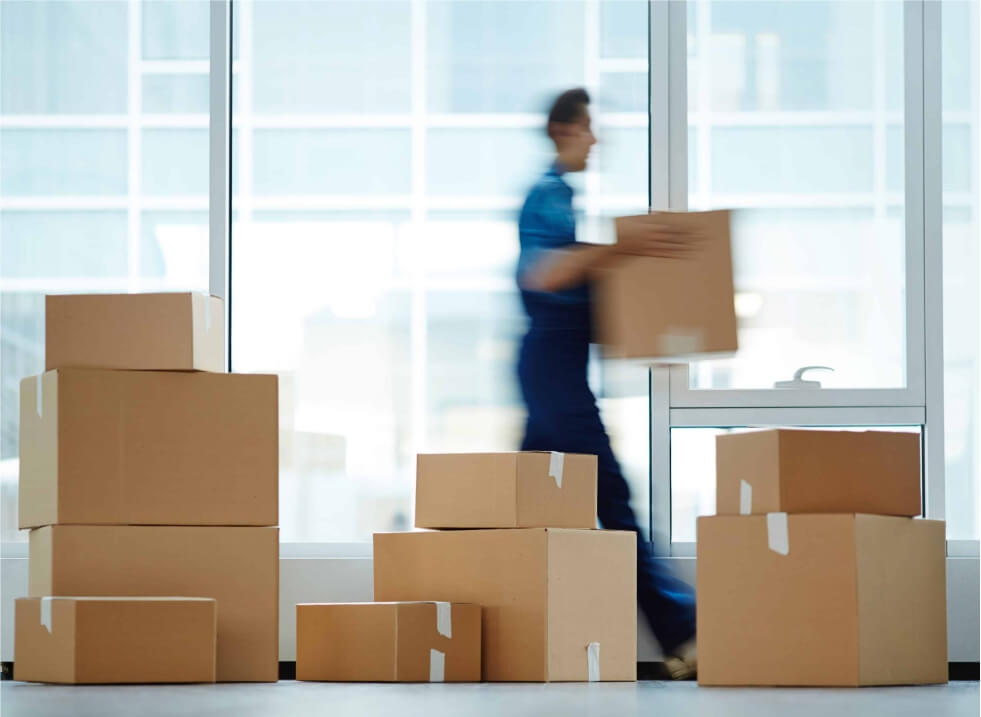 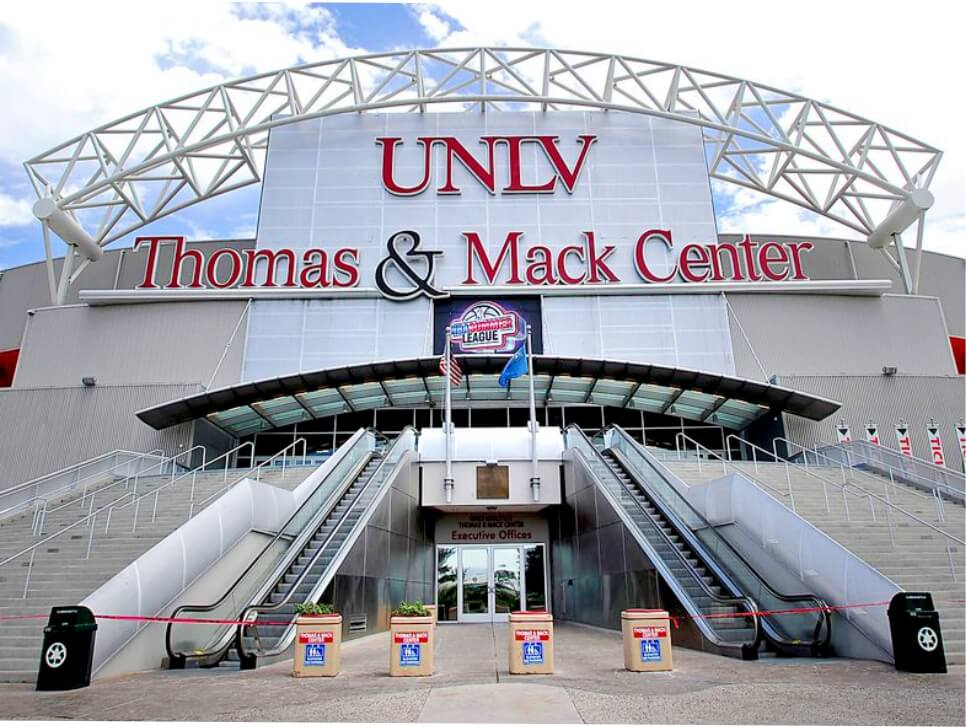 Clark county has become a key rail, truck and airplane shipping hub for the western region of the country, which helps to account for the growth of warehouse storage facilities in the state. Through the programs oﬀered by University of Nevada Las Vegas (UNLV), Las Vegas has become the leading center for training engineers. Hi tech companies have been relocating here throughout the past decade, while UNLV and Southern Nevada Community College have continued to meet their needs by adding new curriculum and new continuing education courses for their scientists.

Much of the growth is due to the aggressive eﬀorts of the Nevada Development Authority, whose goal has been diversiﬁcation in the southern Nevada economy. During the past ﬁve years, NDA and the Chamber of Commerce have attracted more than 50 new companies to our area. Among them are Tesla, Citibank, Ocean Spray, Williams Sonoma, Marin Credit Card Services, Household Finance...to name just a few.

With an estimated 5,500 new residents moving to the Las Vegas Valley each month, Las Vegas and surrounding communities are enjoying an unprecedented upsurge in the local economy.

Personal climate is ideal, also. The average percentage of sunshine on an annual basis is 93%! Average humidity is only 19%! The Las Vegas lifestyle is very attractive, oﬀering a rich cultural heritage and unlimited outdoor recreation. Among these attractions are Lake Mead, Hoover Dam, Death Valley, Valley of Fire, Red Rock Canyon, Great Basin National Park and Mt. Charleston/Lee Canyon. Las Vegas is just a few hours from Utah's ski resorts and only 45 minutes to Caville Bay and Echo Bay marinas at Lake Mead. Water parks, theme/amusement parks and many new family oriented activities throughout the valley.

Leisure and fun attract residents and visitors to our 24 hour city! From sports to games, classical music to rock concerts, theater, live concerts by the most famous entertainers... on the "strip" and downtown, including dance, galleries, sporting events, Downtown oﬀers the Fremont Experience, while the "strip" oﬀers the ﬁnest in shopping, ﬁne dining, water parks, theme parks, family entertainment and the shows for which Las Vegas has always been famous! 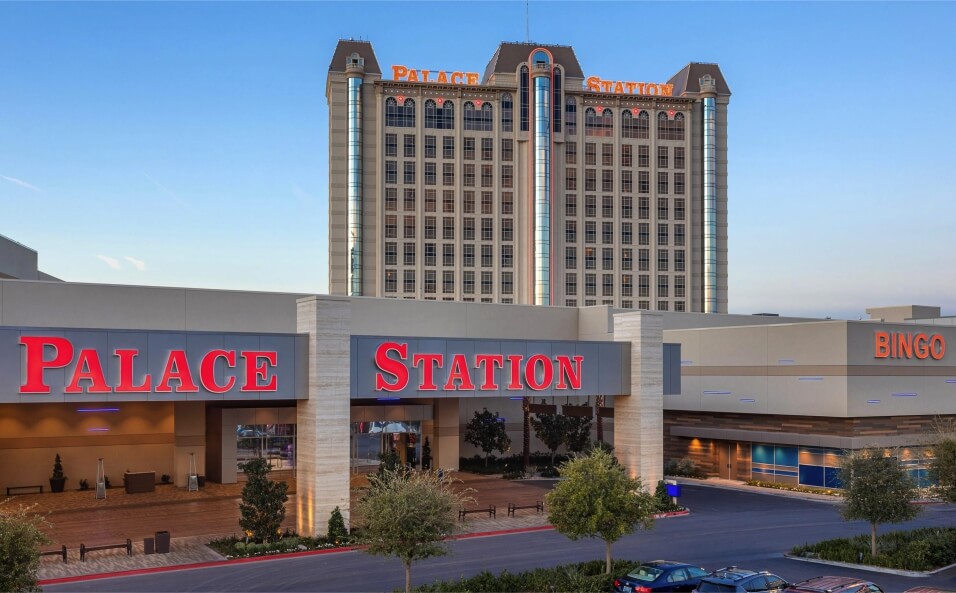 McCARRAN INTERNATIONAL AIRPORT is the 9th busiest airport in the country, accommodating more than 84,000 passengers arriving and departing each day. McCARRAN employs more than 10,000 people and generates more than $7 billion annually. More than 800 ﬂights are serviced each day. 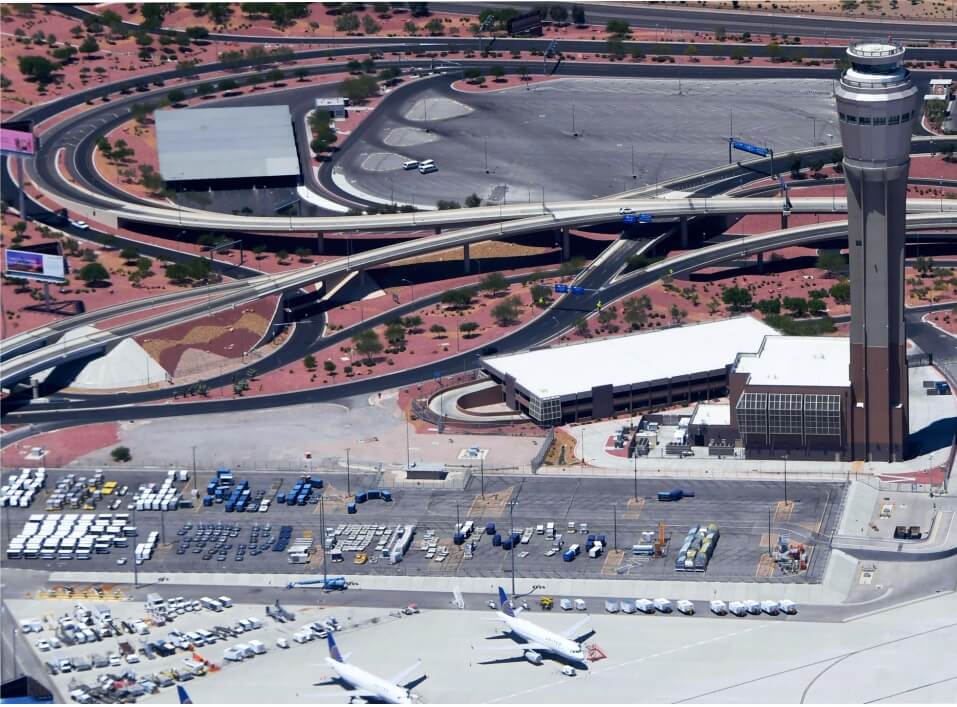 The McCARRAN International Cargo Center continues to expand due to southern Nevada's position in global commerce. Having opened in 1993, the center oﬀers more than 170,000 square feet of warehouse storage space. The Foreign Trade Zone, a signiﬁcant business center for the western region, has designated an additional 160 acres of land for its expansion. 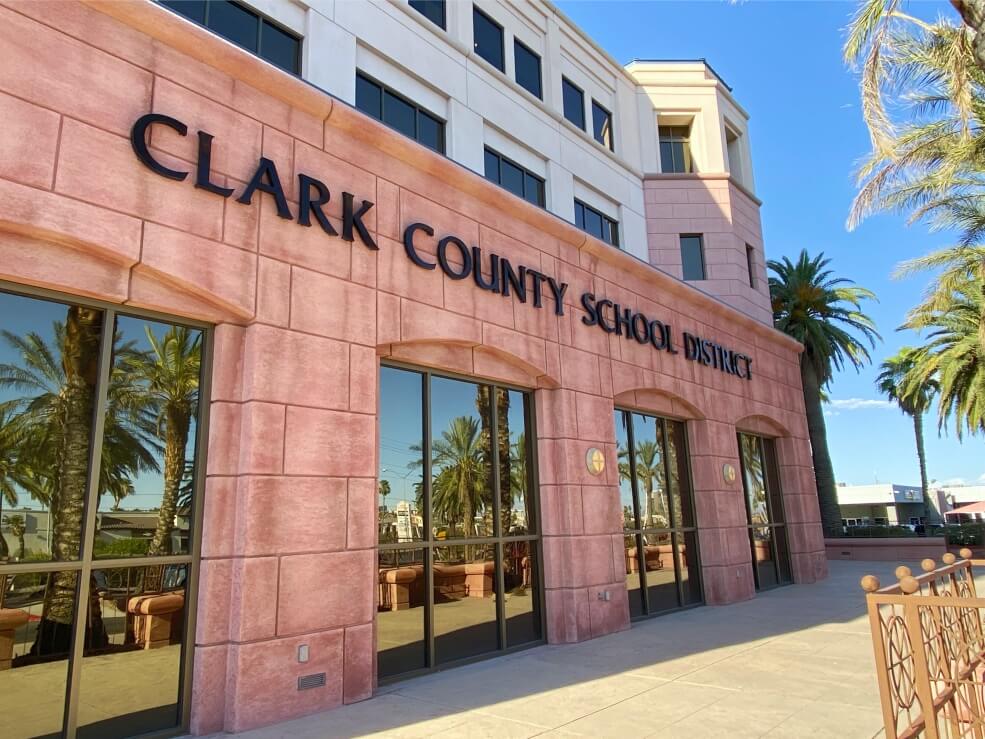 The CLARK COUNTY SCHOOL DISTRICT, the second largest employer in southern Nevada, employs more than 40,000 people. The school district expects its student population to grow to about 14,000 children annually for the next several years. It plans to generate $350 million a year, funds needed to build new schools and hire 1,500 new teachers each year. More than $10 million has been raised by Clark County public Education Foundation in an eﬀort to expand and support improvements in education. Clark County oﬀers one of the country's most eﬀective community partnership programs.

UNIVERSITY OF NEVADA LAS VEGAS (UNLV) has just added a $40 million library, among its other expansions. UNLV is one of only 165 universities nationally that oﬀers a Law School. Community College of Southern Nevada has also expanded to accommodate its growing population. The population of CCSN has doubled in the past 10 years, to more than 20,000 students. The school has a faculty of more than 250, the college oﬀers a new $5 million High Tech Center at one of its 3 campuses and 50 extension centers. Its Computer College features 200 computers and plans include a new $11 million campus in Henderson.

University of Nevada School of Medicine was established in 1969. It is aﬃliated with hospitals and clinics throughout southern Nevada and caters to a small group of about 50 students. USOM oﬀers programs in family practice, internal medicine, obstetrics/gynecology, surgery, psychiatry and pediatrics. 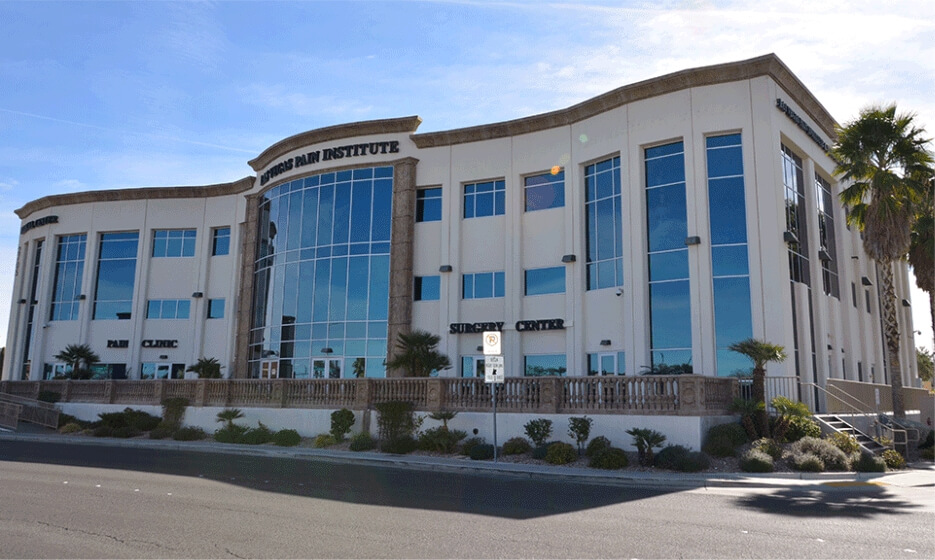 Las Vegas has been successful in keeping up with latest technologies in medicine to serve the growing population. As the community grows, so do the hospitals, clinics, satellite medical facilities, quick care facilities and the number of physicians attending to our residents. University Medical Center is famous for its trauma center, as is the Sunrise Hospital Bone Marrow Transplant Center. Other facilities include cardiac rehabilitation services, neonatal care, triage equipment speciﬁcally designed for children, Sunrise Regional neonatal Center. More than 600 open-heart surgeries are performed each year at area hospitals. Among new medical centers are Summerlin Medical Center, Sunrise Mountain View Hospital, Desert Springs Hospital and St. Rose Dominican Hospital's new Henderson facility.

Specialty hospitals include Charter Hospital, Rehabilitation Hospital of Nevada, Horizon Specialty Hospital and several others. Several new congregate care and adult care centers have opened in the past 2 years, with services catering to all aspects of elder care.

And Las Vegas is a shopper's paradise! With the Galleria Mall in Henderson, Fashion Mall, Factory Outlet Mall, Meadows Mall, Forum Shops, Tivoli Village, Green Valley Center, City Center, 1 mile mall at Planet Hollywood, the new Aladdin and Venetian specialty boutiques, Boulevard Mall and the beautiful shops within the resorts, one can "shop 'til you drop!"

So, why not live in the city with the best climate, most entertainment, lowest tax rates, lowest utility costs in the western US – where the economy continues to thrive and employment oﬀers unlimited opportunities and the cost of living is lower than most metropolitan cities of the same size!

Find Solutions for all of your Real Estate Needs

Your request was sent successfully. ×

We have received your message, and our representatives will contact you as soon as possible.